It’s amazing how many people with the various types of autoimmune arthritis have allergies and food sensitivities. Kinda makes you wonder if there’s a connection.

Unfortunately, some people assume that food allergies are a figment of the imagination. I recall years ago telling my daughter’s rheum that she was allergic to dairy, soy, and eggs. That doctor asked no follow-up questions, yet the letter back to our family physician put quote marks around “food allergies” as if we were making things up. Had the rheumatologist bothered to ask (or at least expressed skepticism), we could have clarified that an allergist said that she had food allergies.

One school of thought has studied which foods are most likely to cause reactions in people with autoimmune diseases, then put together an eating plan that eliminates all those foods that might be causing problems. After a suitable period of time not eating foods that tend to be problematic, those foods can then be re-introduced one at a time – paying careful attention to whether or not the reintroduction causes a reaction.

This seems like a reasonable approach. For myself, I know that if I ingest milk, within one day I have tiny red bumps all over my upper arms. It takes six weeks of no-milk for those bumps to go away. So when people talk of eliminating a food for a month, I tend to squint at them and question what they hope to accomplish in only one month.

I know a few people who have tried this particular elimination diet, but they didn’t make it sound especially attractive – lots of restrictions and no real meals. As it turns out, I suspect that they didn’t really comprehend all that it entailed. They understood the “eliminate” portion, but not the “eat healthy” part. The goal is to focus on nutrient-rich foods and work on eating a well-balanced diet while avoiding potential allergens. I’m finding lots of delicious recipes (and a few strange ones).

I don’t know about you, but I think that looks like lots of pretty nutritious foods!

According to this theory, certain food groups are most likely to cause people to react, and it amazes me how many of these foods I’ve known for years to be a problem.  Categories of foods to be avoided for a period of time under this plan, are:

• Dairy (I already know that I have problems with milk & cheddar cheese)
• Eggs (I can eat duck eggs but not chicken eggs)
• Grains (I know I have problems with some grains)
• Legumes (I’m allergic to soy, and don’t eat peanuts or peas)
• Nightshades (I refuse to eat eggplant; potatoes make me ill; paprika makes my mouth feel like it’s on fire)
• Nuts
• Seeds
• Refined/processed sugars
• Refined/processed fats/oils (I know that some fats cause me to flare)
• Alcohol
• Sugar substitutes

Based on what I know about how my body reacts to some of these foods, I’ve decided that it might be worth taking the time to do the full-blown elimination diet while focusing on nutrient-dense meals. I’ll also be incorporating what I’ve learned helping my mom get her diabetes under control (considering the glycemic load of foods, balancing protein:carb ratios). Since I know that it takes a full six weeks to get rid of the rash that milk gives me, I’m planning to try this eating plan for at least two months, then start re-introducing foods.

Reports are that many people with autoimmune diseases are able to identify food sensitivities and then adjust their diets accordingly, and are able to put their disease into remission.

I tend to be skeptical. Unlike much in the CAM world, though, nobody’s getting rich fleecing sick people with this elimination diet. The information is available freely on the internet. We’re going to eat anyway – this just has us make healthier choices. I don’t know if I’ll get remission, but I’m certainly willing to adjust my diet if it means that I’ll feel better.

Some people go cold-turkey, jumping in all at once. I think that’s a good idea – in theory. In practice, I just haven’t managed to write up all the menus yet. I’ve tried, but life keeps encroaching on my time! What seems to be working is easing my way into it, finding and trying recipes when I can.

I’ve managed to write menus for three weeks’ worth of breakfasts. My goal is 18g protein with 39g carb, and the glycemic load 10-15; I’m rarely exact, but usually close. The wonderful thing from a time-management perspective is that many of these can be prepared in advance and stuck in the freezer. So if a recipe serves 8, I can eat it once and put seven servings in the freezer – so I actually have many more than 3 weeks’ worth of menus. 😊

The key to success seems to be careful planning.  If you walk into the kitchen hungry and wonder what to fix, it’s easy to default to the familiar — which might not be what’s best.  Planning in advance so that there are no decisions to be made at mealtime seems to make a huge difference (at least for me).

In case you’re interested in some new (sometimes strange) breakfast recipes, I’ve included links below.   Many of these can be made ahead, frozen, and reheated at a later date.

Weekends:
Traditionally, my family eats pancakes (preferably huckleberry) or waffles on Saturday mornings.  Sunday’s breakfast is prepared Saturday night, with a ham going into the crockpot to slow-cook, and cinnamon rolls prepped and set in the oven to rise overnight, and with the oven on time-bake so that we can wake up Sunday morning to the wonderful aroma of fresh-baked cinnamon rolls and ham (served with applesauce on the side).

Obviously our traditions do not fit into my new way of eating. I’m still making my family their traditional foods. For me, I’ve searched for similar replacements:

Note: because I’m trying to carefully balance proteins:carbs at 18:39 per meal, the serving sizes that I’m using do not always (ever) match up to the recipe creators’ serving sizes — which is what has taken me so long to find menus that work without tons of repetition.  It’s not just “eat this, don’t eat that,” but working on the macro-nutrient quantities, too 🙂 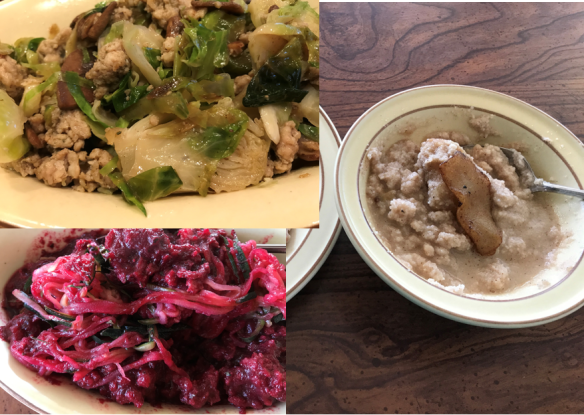 Now that breakfasts seem to be under control, I’ll begin working on supper menus.  Please chime in if you have favorites to add.