Does your doctor use a computer in the exam room? Some people think that computers are a great way to keep track of patient information.   Others see some advantage, but problems in the implementation.  There are also a few Luddites who oppose this change simply on principle.   I’ve had good experiences, and bad experiences, and believe we have a long way to go before computers are as helpful as they could be.

There are two separate issues.  The first one is quite significant:  is there software that will do what doctors need it to do?  The other issue is how computers affect the doctor-patient relationship – definitely another significant factor!

In every other field, the best way to buy software is to define what you need to do, then look for programs that will meet that need.  To date, it appears that the accountants are shopping for software to meet their billing needs, without consulting physicians to determine what doctors want or need.  Not being a doctor, I can’t really elaborate on that, but when doctors and nurses spend more time cursing the software than they do seeing patients and documenting the encounter, there’s obviously a problem.

As a patient, I’ve seen that computers in the exam room have an impact on the doctor-patient relationship.  The doctor’s behavior is important.  So is room setup.  Both of these issues need to be considered.

One doctor I saw had exam rooms set up like this: 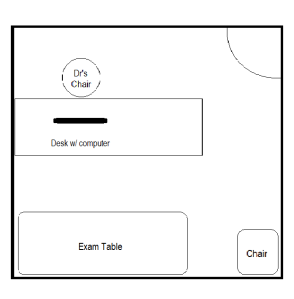 In contrast, I’ve been in other exam rooms that handled the computer’s presence better: 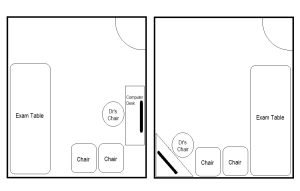 Both of these room configurations allow the doctor to sit with the patient.  No computer comes between them.  My preference is for the room on the right, where the doctor is still 45° to the patient when looking straight at the computer screen.

These illustrations aren’t the only types of rooms I’ve seen.  At Children’s Hospital, my daughter’s rheumatologist sits at the end of the exam table and talks with her.  The computer is clear across the room, and data entry is done by a scribe; at the end of the appointment, the doctor clicks a few buttons.  The computer seems to be a tool that helps provide prescriptions and information, not a deity to be worshipped by everyone in the building.

About eight years ago, I saw a doctor who carried a laptop from one room to the next.  At my first appointment, he grinned and said that he found it easier to keep his notes on computer instead of paper.  It didn’t affect the exam or our rapport.  Everything seemed normal, except that he typed his notes instead of handwriting them.  It worked well.  That would be ideal (and should be easier today, with tablet computers).

My favorite way of handling computers, however, is the doctor who keeps the computer in his office and out of the exam room entirely.  He obviously pulls my file up to refresh his mind before coming into the exam room.  We talk and he does an exam, then he returns to his desk to type his notes while I dress, and there’s a prescription waiting at the front desk by the time I check out.  It seems the most efficient, and the computer isn’t at all intrusive.

The worst computer setup I’ve ever experienced had the computer behind the doctor so that he had to turn his back to me.  Or maybe that was a good thing – I was able to read over his shoulder.  When he typed, “no pain on movement” I was able to ask, “Why would you say that?”  He was astonished (1) that I was looking over his shoulder, (2) that I questioned him, and (3) that he got it wrong.  He had asked if I could move my wrist, not if it hurt to move it.  Huge difference – and we never would have known if I hadn’t looked at what he was typing.  It would be incredibly easy for doctors to project their computer screen onto a wall so that the patient could see what’s being said.  Patients might not feel quite so ignored while doctors are typing, and we’d know that the information going into our chart is accurate.

As more doctors switch to electronic medical records, patients will insist on the computer being a tool to help, not an interference.  We will refuse to see people who make us feel like saying My Doctor is a Computer!

Share your experience.  Do you like computers in the exam room, or does their presence cause problems?

3 thoughts on “Computers in the Exam Room”